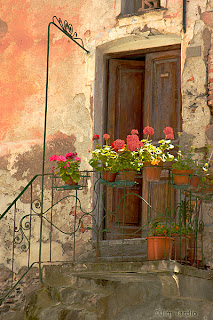 Daydreaming of the quaint Italian village of long ago, she is mesmerized by the memories. Hearing the laughter of children playing and the whispers of  lovers, as they sip their morning coffees, gazing into each other's eyes. Startled by the tinkling of a bell from a bicycle, they scamper across the street.

Oh, to smell the sweet, buttery fragrance of freshly, baked bread in the air and hear the whinny of a horses pulling buggies one more time.  The sweet, delicious thought of strolling through the winegrower's field barefoot in the night and stuffing her cheeks with grapes, brings a smile to her lips once more. The vision in her mind,  makes her heart beat faster and her cheeks flush. To see the foggy mist in the morning as the sun came up over the purple hills,  would be heaven.

The only sin would be to not share the beauty with her love. For a site such as this, could only be so beautiful when shared with the eyes of those with only the purest love in their hearts. Otherwise, such joy would be forever lost, like a song on deaf ears. For this reason, she swore she would only indulge in such sweetness, if her darling lover were there by her side. Otherwise, she would keep this place tucked away only in her memory.

With all of her heart and soul, she prayed to God for her sweet love to come back to her. She never believed that he would simply wander out of her life, like a ship lost at sea. She knew him too well, to think for one solitary second, that he would wake up one day loving her and then, mid-stream, change his mind and go on with his life, as if nothing had happened. She knew with all of her being that something horrible happened to him and he was unable to give her warning. Just as sure as the sun came up every morning, she knew that her beloved would walk into her life once again and tell her that he loved her now as ever. The story made perfect sense and she would tell anyone and everyone, who would stop to listen. Even for just a little bit.

After the initial shock of his absence, she began to put the pieces of the puzzle together in her mind. All of the things he told her.. In fact, she believed that his departure made perfect sense and he would arrive any day. It didn't matter to her whether she waited three months or three years. She was convinced that her lover had crept away quietly, only to protect her from evil and possible death. It wasn't a story too far-fetched to believe, when you considered the fact that their relationship flourished during the war and many were ripped from loves embrace, unwillingly.

Yet, to think she would still hold onto the mere belief of  their love's true spirit for decades, is something some would say, would only be found in novels. But, as God is my witness, I am here to say this lady in love, still waits for her hearts desire, faithfully. In all my living born days, I have never seen anyone so devoted to an old flame as long as this, in his absence and still keep a smile on her face, through all her pitiful loneliness. The fact is, she no longer cries for him, except in her dreams. For then, she is only able to grasp the harsh reality that her lover may never return to her warmth embrace. But as painful as it may be, she still longs to sleep. For sleep is the only place she can see him and hold him, as she once did in the quiet, grape scented night, underneath the warm light of the moon.

But, as sure as sleep ends the day, she would wake each morning with a new belief in all things pure and beautiful. Many an hour was spent in the garden, where she could feel the earth with her hands and know that all was right in the world. Somehow, when she could see a sprout come forth from the ground with nothing more than water and sunlight, she believed in miracles. If this small seed could change into a tree, a flower or a piece of fruit, then all things were possible and she held onto hope.

Another joy of hers, was the time she took to sit on the porch in the evenings and listen to the music of the locusts as they sang like violins to the setting of the sun. Every sunset was a reminder of the times she sat with her lover under the sycamore tree and talked without a care in the world. She longed for the simple times again. She would think of the funny things he would say and how she would giggle and blush . He always loved to pretend he was from Texas. He was full-blooded Italian, but he could make you believe he was born in Texas with his accent.  He was sure a funny fellow. He had such a vivid imagination. She loved that about him. The way he could transport her into another time and place. Maybe that's what happened. He went to another time and place and will be returning shortly for supper. She was sure, as the day is long.