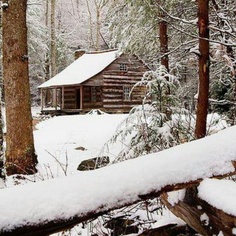 Her heart was at the cabin. She longed to feel the cool October air and to smell baked apples in the oven. Sitting on the padded bench near the window, a soft wool scarf wrapped around her shoulders, she let her imagination take her there. Closing her eyes and listening to the crackle of the fireplace, she willed herself to go to the cabin. She could almost taste the apple crisp.

It was October 31st, 1975. They were nestled in a tiny little cabin, just outside the town of Jackson Hole, Wyoming. Mom and dad had found this place while roaming the countryside on a weekend road trip during the summer. Mom had the nerve to ask dad to knock at the door and ask the folks if they would mind renting their cabin for a long weekend with the kids. The little elderly couple kindly obliged, saying they needed to visit the grand kids anyway. So, in the blink of an eye, a dream was born.
Mom and dad were city kids who loved country life and did all they could to share their love of the great outdoors with us. This included nature walks, gardening, camping and the occasional story about how things were, back in the "good ol' days". Nothing could compare to the weekend at the cabin. You see, this cabin was all natural, meaning...no electricity or running water. Being kids, we didn't really think about all the times we turned a light on, used the faucet, or flushed the toilet. Those things had always been there and it was just the way things were. Things were different at the cabin.

I had first been introduced to an outhouse during a camping trip and had pretty much decided that I'd rather piss in the dirt. The thought of any creepy crawly thing just waiting for a nice bite of my behind, was enough to make darn sure I didn't need to go number two for several days. That was during the summer, when we could take a shovel and dig a hole and cover it up. Now, it was October in Wyoming and the dirt was frozen like a rock already. There was no digging holes. I had to get friendly with the outhouse. I decided that, if wild animals didn't like fire, then snakes and bugs probably didn't either. So, I brought myself a candle, nestled in a jar and set it on the ground next to me. Sure enough, the little buggers scattered.

Since there was no electricity, that definitely meant no TV or radio. We were forced to entertain ourselves. Luckily, mom had thought ahead and brought some yarn, a crochet hook, some books, and all of our musical instruments to keep us occupied. My Gramma had taught me how to do the chain stitch, years before and that's as far as it went. I decided to make the world's longest chain. I figured I could string bells on it for a Christmas decoration or something. While I had the yarn and crochet hook in my hands I could almost feel my Gramma next to me. I sure wished I had been more patient and learned more. Maybe I could have made mittens or a hat. There was something therapeutic about working with my hands in front of the fire. I knew this must have been what my Gramma had felt like when she was a kid.

I soon realized that being at the cabin wasn't some form of Chinese torture, but actually kinda nice. I had always loved a fireplace and since we didn't have one at home, it was special. The fire was magical. The warmth, the smell, the crackling sounds and all the colors seemed to warm my entire being and calm me like nothing else had before. I wanted to sit near the fire and look at it for hours.

After a while of creating the worlds longest chain, I began to lose interest and decided to dig through the box of books mom had brought. I found one that I had started, but never finished called, "Little Women". I re-positioned myself in the window seat and wrapped a blanket around myself.
I sat mesmerized by the beauty of what I saw next. There was a deer about 10 yards from the door. She seemed to be looking for food, nuzzling the earth. I had never seen a deer so close before. At this distance, I could clearly see the thick frost on her whiskers and her foggy breath shoot from her nose as she snorted at the air. Oh, how I wished to go out and touch her. But, I knew that the squeak of the door would have scared her off, so I watched quietly from the window.

Then out of nowhere, there was a shot. My head rang like the clanging of a dinner bell. I clasped my ears and closed my eyes, fearing the worst. My brain raced around like a mouse in a maze, lost. Somebody must of broke in, wanting food or money. "Oh poor daddy! I hope he's not hurt!" My eyes saw what had happened, but my heart could not believe it. The beautiful deer that was standing before me, was now laying down in a red snowy blanket. I couldn't believe my eyes. My dad stood over it, shotgun in hand. My mind ran out of control. “I didn't know he could shoot! Where in the world did he get that gun? Why did he have to go and kill her?” I wanted to puke.

I felt my feet running, but my head was somewhere else. Racing to the woods with tears pouring out of my eyes, like an endless faucet, I screamed. "I hate him, I hate him! Why did he have to do that? I'll never eat deer as long as I live! Never, never, never!"

I ran till my legs would no longer take me and I fell on my knees and clasped my face in my hands and sobbed. Nobody I had loved had ever died before and now, in an instant it had happened right before my eyes. I was mortified.

My heart ached and pounded in my chest. Slowly I scooped up some snow and washed my face with it, trying to calm myself. Shaking from the shock and the cold, I looked down and realized that I was barefoot. I wrapped the blanket around my frosty feet and leaned back against a giant pine tree that must have been there for a hundred years. I closed my eyes and inhaled the sweet scent of the pine. Just then, I heard a twig snap close by and opened my eyes. It was a baby deer. It looked at me and snorted, as if to say he was ok. It was beautiful and serene. I wondered if I could give him a hug with my eyes,and if he would understand. In an instant, he bowed his head and turned, skipping up the hill, as fast as he'd appeared. I knew then, that this was the way life was in the wild. Mother Nature shared her bounty with us and we were to be grateful and respect the earth.

I stood up and followed my own footsteps back to the cabin. I knew that daddy would be looking for me and it would be dark very soon. I started to run, like a deer in the woods, scampering over the rocks and the snow, feeling freer than I had ever felt before.