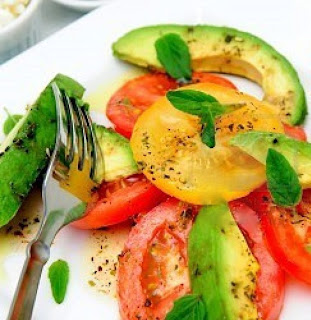 I have to say that I have been recently obsessed with food and the makings thereof. How in the world did it get so complicated? In my quest to better my life and habits, I have realized two things. Number one, I'm getting older. Big surprise, I know. But hey, life is short and as a person who has had no health insurance benefits for the last year and who quite possibly could be in this boat for quite some time, this concerns me.  Also, I realized that my physical health is greatly improved by making changes in the way I eat, drink, sleep, etc. For instance, I have bad knees. Ok, well they aren't so bad, but they seem to talk to me quite a lot and not in a friendly voice. So, I started to listen. I also started asking questions to people that knew a bit about this little conversation I was having with my knees, like my mom and my mother-in-law. Then I started doing my own research, if you will. Turns out, there's a lot of things you can do to avoid "cranky" knees. I tried to break it down into simple bites, so that it wouldn't be so overwhelming. I gave myself two things to do; avoid wheat and avoid dairy. Not hard, right? Ok, I'm not gonna lie. At first, when I was doing my shopping and looking at the ingredient lists of everything, I sort of panicked. Really? Tortillas? Cream of Mushroom soup? The list of wheat packed items was growing and growing....But, the funny thing was after about a week of not eating wheat or dairy I started to feel amazing. I mean, like my knees were not even my own anymore. Those 90 year old knees that invaded my body had taken a silent vacation and my uhmm...30 something, ok 40-ish knees, had come back to see me, if only for a moment or two. So, it wasn't such a terrible thing when I read on a box of crackers that it had wheat, because I knew if I just found an alternative, I would continue to feel better in the weeks, months, even years to come! So, yes my shopping trips took three times longer than before, but I left feeling good about my decisions and knew that I could eat anything that I purchased and know that it was good for me and it would nourish me and make me whole again. I will say in all honesty, that I have had some serious cravings for cheese. But, I have found that a little bit of the taste of cheese from my nutritional yeast flakes takes it away, as well as using olives and olive oil. I also try and find at least one thing healthy for me, that I have never tried before, each time I shop. This makes eating an adventure in healthy living and I feel pretty good about it. Now, the realization of getting older, isn't quite so scary and I look forward to growing old with style, grace and in good health.

If you would like to check out some of the recipes I've pinned on Pinterest, feel free to follow me here..
http://pinterest.com/bandbsmom/bon-appetit/
You will see that my tastes have changed quite dramatically.

Bon Appetit!
Posted by Unknown at 8:23 PM No comments: