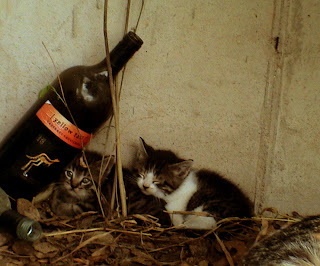 It was six weeks to the day, when Mama Kitty ran off. It had started sprinkling outside and my Darling Love ever so gently, scooped up her box and moved it out of the rain. That did it. She was miffed by all the commotion and took off like a shot in the night. There was much to do and all she wanted was to not be disturbed.

Three days later she showed up, skinny, hungry and thirsty. We were all relieved to see that she had born her babies, but a wee bit concerned as to the whereabouts of them. My Darling Love assured me that nature had run its course and Mama Kitty would share her babies with us, when she saw fit. I waited, not so patiently, day after day, week after week.

Each time a storm would come I would fear the worst. What if she had those babies in the dry creek bed, past the field? They would surely be swept away with the quick current brought on by the rain. We also had owl's in the tree belt out back that would be hankering for a tiny morsel, such as a new born kitten, I'm sure. They weren't too picky. To them a field mouse or a kitten would taste just as sweet. Oh, the things my ever loving mind imagined over the weeks of not seeing or hearing any kittens.

I was sure that they were alive, at least a few, after close inspection of Mama Kitty's underbelly. She had definitely been suckled by at least three, maybe six, muddy babies. That was good news! They were alive! So I waited...and waited.

Then, night before last, my Darling Love said he heard kitties in the darkness. Blame it on too much loud music in my younger years, but Lord, I heard nothing but the hoot of an owl and the makings of a feline love-fest in the distance. As much as I peered out my bedroom window and cocked my head to listen, I heard nothing other than the leaves of the pear tree rustle and those hungry owls in the tree belt. I fell asleep, thinking he was sweet, but crazy.

Yesterday, I had opened the shades to the French doors, like I always do before getting the dog on the leash to go out and do her morning wiggle and romp in the grass. Poochy went crazy, whining, barking and hitting the door with her paws. Oh my Lord! There were three baby kitties sunning themselves next to their mama on the back patio! At least I thought there were. They ran so fast, at the sight of the dog trying to bust the glass to get to them, that it was all such a blur. I screamed, "Kittie's! We've got Kittie's!"

Heaven only knows why it was such a surprise to see three beautiful baby kitties snuggling so sweetly with their mama on my patio. We all knew they would show up, eventually. At least, I had hoped. There was always the possibility that some neighborhood rugrats would get their hands on them first and we wouldn't even get a sight of their cute, little, fuzzy faces. Of course, we had planned to give them all away, except for one. But the truth of the matter was, we weren't sure if we would even get the chance to do that. Lord knows, we don't need another mouth to feed around here. But, my oh my, the site of a kitty sure does bring a smile to one's face!

Here I am, giddy as a school girl, giggling and sneaking up to the window to catch a peek at those cats rolling around and batting at each other's noses. I just can't get enough! Mother Nature is so clever and wise. The way Mama Kitty knows just what to do to take care of her babies is really quite remarkable. After all, it wasn't so long ago that she was just a wee baby herself. Now look at her, all grown up with little ones of her own.

I could sit here and watch them forever and a day and never be bored. Now I understand why people get fed up and move to the country. They've figured out that it's the simple things in life that are so sweet.
Sitting here on this Mother's Day, I have laughed more and smiled much at the joy and wonder of a new Mama Kitty and her three precious babies. Life is good.