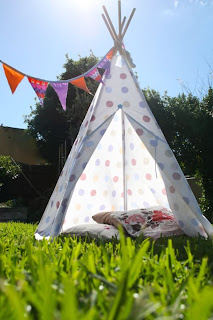 This camping business wasn't all it was cracked up to be. When she was a kid, she used to  love huddling deep inside that old red sleeping bag and sleeping on a lumpy, old army cot. This was nothing like that. She had made a make-shift tent out of an old bed sheet and a broom handle. Thank God she was crafty. Mom had always said she could make something out of  nothing. That was in the kitchen, not in the woods! In all of her wildest dreams, she never imagined that she would be making her bed on a pile of newspapers, like a bum. Where did she go wrong?

It all seemed like a blur. The bills, the marriage, the house....all swirling above her head like a silent tornado. Now she was left holding the pieces of her broken life, with nothing but her beautiful blue-eyed, girl. If it wasn't for her, she didn't know what she would do. She had to be strong  for her, if nothing else. After all, she would always be her baby's mama and nobody could take that from her... nobody.

When they had talked about camping out at the park, they didn't have grandiose plans. They just figured, it was free and relatively safe. She had always told her daughter about the fun she had as a kid, camping with her family. She forgot to mention how she buried her head in her pillow as her dad bounded up the mountain in that pink International 4-door pickup, deathly afraid that she would somehow fall off the edge of the cliff. She had been petrified of heights, but that was nothing like this. She tried to put herself back there, reading her Seventeen magazine, without a care in the world. Life was so simple back then. Now all she could think about was, how dark this place was. Didn't they have street lights at the park? Every little snap of a  twig put her on alert. She felt like a soldier on guard duty. She decided that she wouldn't sleep tonight. Instead, she would watch over her little girl and make sure she rested. Looking down at her face, she saw an angel. Her blonde hair glowing in the moonlight, resting peacefully. She was so brave and strong. She knew in her heart that they would make it through this together. This was just a minor setback, a hitch in her get-along.  Everything was gonna be alright. She kept telling herself that. She had to.

She started to tremble as her mind followed every sound in the night. Trying so hard to not let it break her. She thought about her dad's scrape knuckle breakfasts. Those were the best! Her dad was a great cook and breakfasts were his specialty, with eggs over-easy, hash-browns, bacon and toast. The thought of it made her stomach growl, like a big dog. She began to think of places she could go for a cheap breakfast in the morning, seeing those golden arches glow in her mind's eye. All she wanted was a 10 cent cup of coffee. Did they even have those anymore? She thought of all the places she might be able to find a scrap of food discarded, haphazardly. In her mind, she was a squirrel foraging for food. Not for herself, but for her precious baby. She would never let her go hungry. At least, not for very long. She thought of God and wondered what she had done to deserve this punishment. No, she could not blame him. This sort of  thing happened to a lot of good people. It was the sign of the times. She didn't know exactly what put her here, but she knew she needed to find help. She would set out to go to a church tomorrow and see if there was anyone that could help her find shelter for her and her darling daughter.

In this thought of peace and the hope of promise, she let her eyes and her heart rest, even if just for a little while.